The Early Origins of Autism by Patricia M. Rodier 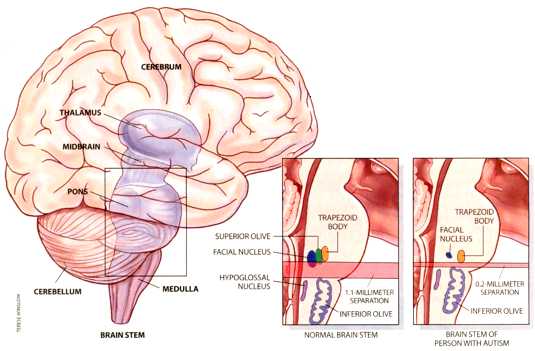 AUTISM'S EFFECTS include changes to the brain stem, the region just above the spinal cord.
The brain stem of a person with autism is shorter than a normal brain stem; the structures
at the junction of the pons and the medulla (such as the facial nucleus and the trapezoid body)
are closer to the structures of the lower medulla (the hypoglossal and the inferior olive). It
is as though a band of tissue were missing. The brain stem of a person with autism also lacks
the superior olive and has a smaller-thhan-normal facial nucleus. Such changes could occur only
in early gestation.

Several environmental risk factors are already known. In utero exposure to rubella (German measles) or to birth defect-causing substances such as ethanol and valproic acid increases the chances that autism will develop. People with certain genetic diseases, such as phenylketonuria and tuberous scle- rosis, also have a greater chance of developing autism. None of these factors, however, is present frequently enough to be responsible for many cases. Furthermore, most exposures to diseases or hazardous substances would be likely to affect both members of a pair of twins rather than just one. Some of the environmental influences must be more subtle than those identified so far. Researchers do not know how the multi- ple factors combine to make some people display symptoms while allowing others to escape them. This variation makes the search for autism's causes especially difficult.

In their 1994 study Miller and Stromland added another environmental contributor to autism: thalidomide exposure in utero. All their subjects -- Swedish adults born in the late 1950s and early 1960s exhibited some of the malformations for which thalidomide is infamous: stunted arms and legs, misshapen or missing ears and thumbs, and neurological dysfunctions of the eye and facial muscles. Because scientists know which organs of the embryo are developing at each stage of pregnancy, they can pinpoint the exact days when a malformation can be induced: the thumb is affected as early as day 22 after conception, the ears from days 20 to 33, and the arms and legs from days 25 to 35. What made the new study so exciting for me was Miller and StrOmland's discovery that most of the thalidomide victims with autism had anomalies in the external part of their ears but no malformations of the arms or legs. This pattern indicated that the subjects had been injured very early in gestation -- 20 to 24 days after conception -- before many women even know they are pregnant.

For embryologists, nothing tells us so much about what happened to an embryo as knowing when it happened. In the case of thalidomide-induced autism, the critical period is much earlier than many investigators would have guessed. Very few neurons form as early as the fourth week of gestation, and most are motor neurons of the cranial nerves, the ones that operate the muscles of the eyes, ears, face, jaw, throat and tongue. The cell bodies of these neurons are located in the brain stem, the region between the spinal cord and the rest of the brain. Because these motor neurons develop at the same time as the external ears, one might predict that the thalidomide victims with autism would also suffer from dysfunctions of the cranial nerves. Miller and Stromland confirmed this prediction -- they found that all the subjects with autism had abnormalities of eye movement or facial expression, or both.

The Spectrum of Autism Disorders

The next logical question was, "Are the cases of autism after thalidomide exposure similar to cases of unknown cause, or are they different?" Aside from their behavioral symptoms, people with autism have often been described not only as normal in appearance but as unusually attractive. They are certainly normal in stature, with normal-to-large heads. The few studies that have tested nonbehavioral features of people with autism, however, have concluded that there are indeed minor physical and neurological anomalies in many cases, and they are the same ones noted in thalidomide-induced autism. For example, minor malformations of the external ears -- notably posterior rotation, in which the top of the ear is tilted backward more than 15 degrees, are more common in children with autism than in typically developing children, children with mental retardation or siblings of children with autism. Dysfunctions of eye movement had been associated with autism before the thalidomide study, and lack of facial expression is one of the behaviors used to diagnose the condition.

The Neurobiology of Autism

Is it possible that all the symptoms of autism arise from changes in the function of the cranial nerves? Probably not. It is more likely that the nerve dysfunctions in people with autism reflect an early brain injury that not only affects the cranial nerves but also has secondary effects on later brain development. That is, the injury to the brain stem might somehow interfere with the proper development or wiring of other brain regions, including those involved in higher-level functions such as speech, resulting in the behavioral symptoms of autism. Or perhaps the ear malformations and cranial nerve dysfunctions are only side effects of an injury that we don't understand. Whatever the true situation may be, the anomalies in patients with autism of unknown cause were much the same as the anomalies in the thalidomide victims with autism. The conclusion was clear: many cases of autism, if not all, are initiated very early in gestation. 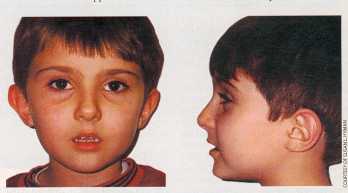 Child with autism is normal in appearance, at least to the untrained eye. But he has a few physical anomalies characteristic of the disorder. The corners of his mouth are low compared with the center of his upper lip, and the tops of his ears flop over (left). His ears are a bit lower than normal and have an almost square shape (right).


The region of the brain implicated by the thalidomide study -- the brain stem -- is one that has rarely been considered in studies of autism or in studies of other kinds of congenital brain damage, for that matter. On a simplistic level, neurobiologists associate the brain stem with the most basic functions: breathing, eating, balance, motor coordination and so forth. Many of the behaviors disturbed in autism, such as language, planning and interpretation of social cues, are believed to be controlled by higher-level regions of the brain, such as the cerebral cortex and the hippocampus in the forebrain.

Yet some symptoms common in autism -- lack of facial expression, hypersensitivity to touch and sound, and sleep disturbances -- do sound like ones more likely to originate in the brain regions associated with basic functions. Furthermore, the most consistently observed abnormality in the brains of people with autism is not a change in the forebrain but a reduction in the number of neurons in the cerebellum, a large processing center of the hindbrain that has long been known to have critical functions in the control of muscle movement.

One reason for scientists' confusion about the brain regions involved in autism may be that our assumptions about where functions are controlled are shaky. For example, the laboratory group led by Eric Courchesne of the University of California at San Diego has shown that parts of the cerebellum are activated during certain tasks requiring high-level cognitive processing. Another difficulty is that the symptoms of autism are so complex. If simpler behavioral abnormalities could be shown to be diagnostic of the disorder, researchers might have a better chance of identifying their source in the nervous system [see box on next page].