The Early Origins of Autism

In my opinion, this is a very important, very under-reported addition to the literature on autism. The original article is available for purchase in the February, 2000 issue of "Scientific American." Just click on the link above to go to that web site for ordering. 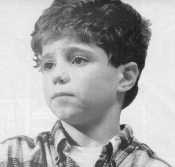 Photo at left, seven-year-old with autism ...

Autism has been mystifying scientists for more than half a century. The complex behavioral disorder encompasses a wide variety of symptoms, most of which usually appear before a child turns three. Children with autism are unable to interpret the emotional states of others, failing to recognize anger, sorrow or manipulative intent. Their language skills are often limited, and they find it difficult to initiate or sustain conversations. They also frequently exhibit an intense preoccupation with a single subject, activity or gesture.

These behaviors can be incredibly debilitating. How can you be included in a typical classroom if you can't be dissuaded from banging your head on your desk? How can you make friends if your overriding interest is in calendars? When children with autism also suffer from mental retardation -- as most of them do -- the prognosis is even worse. Intensive behavioral therapy improves the outcome for many patients, but their symptoms can make it impossible for them to live independently, even if they have normal IQs.

I became involved in the search for autism's causes relatively recently -- and almost by accident. As an embryologist, I previously focused on various birth defects of the brain. In 1994 I attended a remarkable presentation at a scientific conference on research into birth defects.

Two pediatric ophthalmologists, Marilyn T. Miller of the University of Illinois at Chicago and Kerstin Stromland of Goteborg University in Sweden, described a surprising outcome from a study investigating eye motility problems in victims of thalidomide, the morning-sickness drug that caused an epidemic of birth defects in the 1960s. The study's subjects were adults who had been exposed to the drug while still in the womb. After examining these people, Miller and Stromland made an observation that had somehow eluded previous researchers: about five percent of the thalidomide victims had autism, which is about 30 times higher than the rate among the general population.

When I heard these results, I felt a shock of recognition, a feeling so powerful that I actually became dizzy and began to hyperventilate. In the effort to identify autism's causes, researchers had long sought to pinpoint exactly when the disorder begins. Previous speculation had focused on late gestation or early postnatal life as the time of origin, but there was no evidence to back up either hypothesis. The connection with thalidomide suddenly threw a brilliant new light on the subject. It suggested that autism originates in the early weeks of pregnancy, when the embryo's brain and the rest of its nervous system are just beginning to develop. Indeed, Miller and Stromland's work convinced me that the mystery of autism could soon be solved.

At least 16 of every 10,000 babies is born with autism or one of its related disorders [see photo below on this page]. Since autism was first identified in 1943, scientists have made great strides in describing its symptoms. The biological basis for autism, however, has been elusive - an unfortunate circumstance, because such an understanding could enable researchers to identify the leading risk factors for autism and possibly to design new treatments for the condition.

By examining the inheritance of the disorder, researchers have shown that autism runs in families, though not in a clear-cut way. Siblings of people with autism have a 3 to 8 percent chance of being diagnosed with the same disorder. This is much greater than the 0.16 percent risk in the general population but much less than the 50 percent chance that would characterize a genetic disease caused by a single dominant mutation (in which one faulty gene inherited from one parent is sufficient to cause the disorder) or the 25 percent chance that would characterize a single recessive mutation (in which a copy of the faulty gene must be inherited from each parent). The results fit best with models in which variants of several genes contribute to the outcome. To complicate matters further, relatives of people with autism may fail to meet all the criteria for the disorder but still have some of its symptoms. Although these relatives may have some of the gene variants linked to autism -- what- ever they may be -- for some reason the genetic factors are not fully expressed in these individuals.

Studies of twins in the U.K. confirm that autism has a heritable component but suggest that environmental influences play a role as well. For example, if genetic factors alone were involved, monozygotic (identical) twins, who share the same genes, should have a 100 percent chance of sharing the same diagnosis. Instead, when one twin has autism, the second twin has only a 60 percent chance of being diagnosed with the same disorder. That twin also has an 86 percent chance of having some of autism's symptoms. These figures indicate that other factors must modify the genetic predisposition to the disorder.

Failure to use eye contact, facial expression or gestures to regulate social interaction; failure to seek comfort; failure to develop relationships with peers.

Impairment of Communication: Failure to use spoken language, without compensating by gesture; deficit in iniitiating or sustaining a conversation, despite adequate speech; aberrant language (for example, repeating a question instead of replying).

Restricted and Repetitive Interests and Behaviors: Abnormally intense preoccupation with one subject or activity; distress over change; insistence on routines or rituals with no purpose; repetitive movements, such as hand flapping.

Photo, The Spectrum of Autism Disorders

A diagnosis of autism requires that the patient exhibit abnormal behaviors in three categories [see list above] and have especially notable deficits in the category of social interaction. In addition, clinicians have identified several related disorders that share some of the behavioral features of autism but have different emphases or additional symptoms. For example, Pervasive Development Disorder, Not Otherwise Specified (PDD-NOS) denotes patients who miss fulfilling the autism creiteria in one of the three categories. As is true of autism, PDD-NOS includes patients with the whole range of IQs. Asperger syndrome is used to describe patients with normal IQs and no evidence of language delay. Two much rarer diagnoses are Childhood Disintegrative Disorder, in which normal early development is followed by regression to severe disability, and Rett syndrome, a progressive neurological disorder that occurs only in females.

Although many scientists have long known that autism is an inherited disease, recently family studies by Peter Szatmari's group at McMaster University in Ontario suggest that it is the spectrum of symptoms that runs in families, rather than a single diagnosis. For example, a child with autism may have a brother with asperger syndrome, or a woman with autism may have a nephew with PDD-NOS. These family studies strongly suggest taht at least three of the diagnoses -- autism, PDD-NOS, and Asperger sundrome -- arise from some of the same inherited factors. -P.M.R.


View Next Page
Go back to Previous Page